I do think that there is a place for audio tours in galleries and museums. I occasionally like to take a guided tour with a gallery staff, volunteers or an audio tour, particularly when I am unfamiliar with the subject matter of an exhibition or when I am in a different country and English is not one of the primary languages spoken in the museum.

An audio tour can really enhance the visitor experience and was probably at the forefront of  museums trying to better engage digitally with their visitors. The first audio tour is said to have been developed by the innovative Director, Willem Sandburg at the Stedelijk Museum, Amsterdam as early as 1952, and there have been many changes and improvements to audio technology since then. 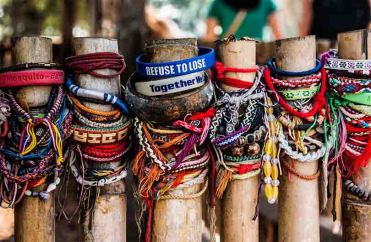 The best audio tour that I have ever taken was at Choeung Ek (the Killing Fields) in Cambodia. The tour was developed by an Australian company – Narrowcasters  (available in 15 languages) and allowed the visitor to move around the memorial park at their own pace, to stop, sit or reflect on the horrific events surrounding the genocide of three million Cambodians by the Khmer Rouge. The audio used historical facts, music, poetry and the personal stories of survivors which were incredibly evocative and dealt with difficult subject matter in a place which was full of the ghosts of innocent men, women and children. The park had plenty of space for visitors to wander in peace and quiet to think their own thoughts in relative silence.

Sadly, when I visited the Scottish Greats at the Art Gallery of NSW , the free audio tours detracted from my museum visit because the majority of visitors forgot about their audio tour etiquette in the limited exhibition space. I decided not to take a tour on this occasion because I wanted to really look at the objects, drink in the fact that I was actually seeing some of them in real life and then go back and look at the information about the works that I was drawn to.

I learned this technique from Heather Whitely Robertson who was at the Museum of Contemporary Art, Sydney (Director, Audiences and Creative Learning) and has now gone to the Art Gallery of NSW, Sydney (Head of Activation and Learning) in a similar role. It works for me because I am a visual learner and I like to connect with objects visually in the first place and then find out the facts later. At the MCA, Heather and her team introduced all sorts of techniques to encourage students to engage with exhibitions in a more creative way rather than just ticking off the visit and walking away with very little learnt from the experience. As far as taking audio tours, users need to follow some basic rules.

Rule No 1 for Audio Tours

Look at the object in front of you and then step back to listen to the information being provided on your audio guide. Do not stop and stand in front of each object for an inordinate amount of time, blocking the view of crowds milling around behind you while you remain oblivious to their presence and mounting frustration.

Rule No 2 for Audio Tours

Do not have conversations with your companions when taking an audio tour because you have something in your ears and you don’t realise that you are talking loudly which spoils the atmosphere for the rest of us trying to soak up the beauty of the amazing works from the Scottish National Gallery in Edinburgh (or any other gallery or museum!).

There may be other rules that I haven’t thought of yet.

This site uses Akismet to reduce spam. Learn how your comment data is processed.